The client selected Rob Wright to add a comprehensive master suite to this small 1927 arts and crafts bungalow style home. The house is in an up-and-coming neighborhood with small lots, but an increasingly desirable location. The neighborhood is close to trendy shops and restaurants, and downtown Richmond is a mere 10-minute commute. The client hoped to add a master bedroom, master bath, a seating area, loft, and den.

The homeowner specifically wanted to:

Rob Wright and his company, Cabinetry & Construction, achieved these goals through the following: 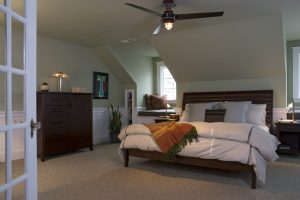 The homeowner wanted a modern feel in the bath, which we achieved using industrial materials of the art deco era, which was contemporary to the 1927 house. A glass-block wall, reproduction art-moderne sconces, and a chrome-legged sink base evoke that period. The owner chose multicolored slate tile for the floor and shower enclosure, with slate-and-glass accents to complement the glass block partition. We created the concrete vanity counter to blend with the slate but also to continue the industrial feel. 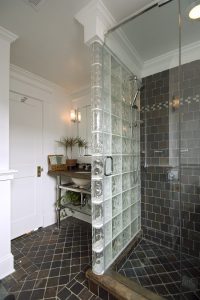 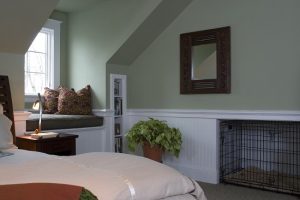 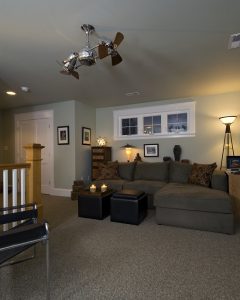 An anecdote about this house and project:

During construction, an elderly woman and her daughter came to the front door. The woman, in Richmond for a visit, had been born in the house, and asked to see it again. The owner gladly showed her around, including the addition, which delighted her. Before she left, she recalled playing as a child in the old fireplace, where she had written her name. The owner quickly fetched from his shed a piece of the old flue he had removed in earlier remodeling. Sure enough, there was her name as she had written it some 70 years earlier.